One Web, Many Devices

A presentation from the Update conference held in Brighton in September 2011. 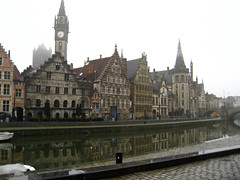 Ghent! Yes, correct! Well done. Are you from Belgium, sir? Welcome. Welcome to Brighton. You’re from Ghent? Fantastic! You have a beautiful, beautiful town in Ghent.

I was there earlier this year and had a lovely time. I was speaking at an event there about the web, about digital preservation, and I really, really liked the place. And I met some lovely people. 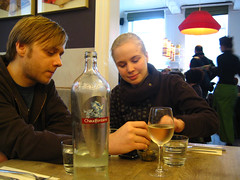 This is Benny and Joke from Ghent. They were looking after me, making sure I had a good time. They drove me back to Brussels as well when it was time for me to get my Eurostar back here.

On the drive back, I was chatting with Joke about various things and we got to chatting about music. I play in a band and it turns out that Joke plays in a band as well. She played in a hardcore punk band. 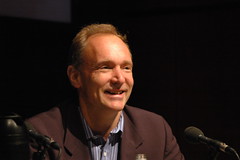 Here we are, twenty years later. The web is twenty years old this year, which is pretty fantastic, going stronger than ever.

Coming up to the twentieth anniversary of the web, Sir Tim wrote an essay reiterating the design principles underlying the web. He said that the primary design principle underlying the web’s usefulness and growth is universality. That means that the web should be accessible to people with disabilities. It also means it should work with any kind of information, whether it’s a document or a point of data; whether it’s a silly tweet or a scholarly document. And he also reiterated the fact that it should be accessible from any kind of device: small screen or large, stationary or mobile.

The result is this huge tangled mess of a web. It’s chaotic, it’s unplanned, and it’s gorgeous …because none of these nodes on this web needed to ask for permission. That’s what makes it so beautiful.

Every other kind of hypertext system that was proposed before then pretty much had some kind of idea of two-way linking. Sir Tim said “No, one-way linking: let’s see how it works out.” Sure, we’ve got problems, we’ve got linkrot, we’ve got all sorts of issues, but look at the result. Look at this amazing web we have.

So the web, I consider to be: resources (mostly HTML) delivered over HTTP, addressable at URLs. HTML, HTTP, URLs. That’s the web.

That means you could take two disparate, completely unconnected resources from over here and over here, and you could write a third resource that links the two of them together, creating something completely new, and you can publish that—and you didn’t need to ask for permission from either of those resources to create that. It’s pretty wonderful: you don’t need to ask for permission.

Well it was CD-ROMs back then. Today it’s iPad apps, iPhone apps, other kinds of native apps: great little things, but they sit in isolation. I can’t link from one to another. I can’t join them up. Thousands—millions—of islands that are unconnected, unlike the web, this messy, tangle of interconnected nodes. It might not be as perfect as those native apps but in aggregate it’s absolutely gorgeous.

People often compare a great native app and say “Oh yeah, try and do that with a web app.” But I think a more fair comparison is to take any native app and compare it with the whole web.

The web is the killer app.

Ask yourself: what would you rather be contributing to—Encarta or Wikipedia?

But there’s another kind of time, not just the real time, there’s the long time. How long does something stick around? How long will a resource remain?

Well, when something has a name—like a URL—if you take care of it, you can ensure that you are contributing to the long time as well as the real time; that something that’s valuable today should remain valuable next week, and next month, next year, five years from now, ten years from now.

I think that’s possible on the web. I think it’s a lot harder to do if what you’re creating is tied to a specific technology …requires a specific device. When that device goes, your creation goes with it.

Robin Sloan talks about these two kinds of time. He calls them flow and stock. He says:

Flow is the feed. It’s the stream of daily and sub-daily updates that remind people that you exits. Stock is the durable stuff. It’s what people discover via search. It’s what spreads slowly but surely. Flow is in the ascendent today but we neglect stock at our peril.

You don’t need permission to be awesome.

And that’s absolutely true …on the web. In the app store? …you need permission to be awesome.

Has anyone here contributed an app to the app store? I’m sure you guys could tell me some stories about what it’s like to have to ask permission to be awesome.

I don’t just mean the app store. I mean any kind of walled-garden ecosystem—it was Facebook apps, it was Adobe Air for a while there—something that’s tied to a specific technology or a specific kind of device. You are now in debt to the company maintaining that.

I see a lot of Flash developers (or ex-Flash developers) moving to making iPhone apps and iPad apps, and I think I understand why it appeals. Because the whole time they were making these Flash creations, these Flash movies, pieces of art, products, services …they were putting them out there on the web but they were never really of the web. They required that plug-in. They were always enslaved to Macromedia (and then Adobe) and they simply saw the web as a distribution mechanism—and that’s fine. They were never contributing to the web so much as using the web to get their creations out there.

So when the iPhone and the iPad came along with its app store, it was simply another ecosystem that they could use as a distribution channel. All they were really doing was swapping one form of lock-in for another form of lock-in. So I understand the appeal there.

I don’t think that’s true. Quite the opposite, actually…

So, the world before the web was a world of atoms rather than a world of bits. The thing with a world of atoms is there’s only so many atoms to go around. There’s limited shelf space in the real world. That means we need systems, we need companies, we need entities do decide what goes on those shelves.

The web came along and smashed all that. Now everything—no matter how big or how small—everything is one link away. I can link to anything; something hugely world-famous or something incredibly obscure. That’s powerful and that threatens the existing ecosystem of control.

So we had publishers and consumers in the old world. We had the controllers and the controlled. Then the web came along and threatened all that.

There’s the music publishing industry. The film industry. We hear a lot about newspapers and magazines. All of these entities threatened by the web …these are all the same companies that are really, really excited about app stores.

Why are the excited? Because they see there is a way to turn back the clock, to turn back progress, to bring back scarcity and control, to return to a world of limited shelf space.

Magazine publishers are creaming their pants about the iPad. It’s going to “save” publishing. They think they can put the genie back in the bottle.

So when I rail against these closed ecosystems, I’m not railing against progress. Quite the opposite. I want more progress. I want more disruption. More chaos. More disorder. I want to see things fall apart a little bit more.

That’s why I publish on the web. I put something out there at a URL (it has a name) and it can be accessed from any device, large screen or small, stationary or mobile, colour or monochrome. And it will remain accessible.

I’ve been publishing on my site for ten years now. I fully expect to be publishing in another ten. I’m contributing to the stock, not just the flow. For ten years I’ve been linking to things without asking for permission and for ten years, if you wanted to link to me you didn’t need to ask me for permission, you could just do that. And the different devices, they’ve come and they’ve gone over those years and new devices will come and go but the formats I’m publishing in are open, are standards. Publishing HTML over HTTP at a URL.

The first purpose—I guess there’s kind of hierarchy of purpose—the first purpose is simply to do it for the fun of it. And that’s fantastic. I think we need to do that, to just create stuff for the heck of it, for the joy of creating, of making, of figuring something out. Seb is someone who’s great at doing this. He just makes all sorts of stuff. Brendan Dawes does something new every week just for the fun of it. We need to keep doing that. That’s great.

Then I guess the next level is when you’re doing that as a profession. You’re getting paid for it. Now you’re not doing it for yourself, you’re doing it for your boss or your client. And, y’know, that doesn’t always work out so well. Because if the only reason you’re building something is to please your boss or please your client because they’re paying the bills …well you’re no better than a prostitute really.

That’s why I don’t want to tie my creations to specific technologies, specific devices. I don’t want to be locked in. I want this stuff to survive over time and contribute to our collective good.

I began by talking about music—specifically hardcore punk music—and I’m going to finish with another musician: John Lennon. Because when I see really talented makers, really talented creative people, pouring their talent and their creativity into these silos, into these walled gardens, where they’re just contributing to what one company wants—they think they’re being creative when actually they’re creating something that’s going to bloom and die—it saddens me. It saddens me and it makes me kind of angry as well. That creativity could be contributed to the greater good.

And I think John Lennon summed it up pretty well in his song Working Class Hero. He said:

You think you’re so clever and classless and free

…but you’re still fucking peasants as far as I can see.

This presentation is licenced under a Creative Commons attribution licence. You are free to:

Under the following conditions:

Attribution
You must attribute the presentation to Jeremy Keith.

Collections of conference talks on:

You can view recent presentations.

Download PDF versions of the slides I've used to accompany presentations. Beware: they won't wont make much sense outside the context of the talks.