Google Workspace Updates: Google Docs will now use canvas based rendering: this may impact some Chrome extensions

We’re updating the way Google Docs renders documents. Over the course of the next several months, we’ll be migrating the underlying technical implementation of Docs from the current HTML-based rendering approach to a canvas-based approach to improve performance and improve consistency in how content appears across different platforms.

I’ll be very interested to see how they handle the accessibility of this move.

You are not connected to the Internet

This is a very cute offline page. Ali Spittel has written up how it was made too.

Zdog · Round, flat, designer-friendly pseudo-3D engine for canvas and SVG

How to build a simple Camera component - Frontend News #4

A step-by-step guide to wrapping up a self-contained bit of functionality (a camera, in this case) into a web component.

Mind you, it would be nice if there were some thought given to fallbacks, like say:

Browser implementations of Sol LeWitt’s conceptual and minimal art, many of which only exist as instructions like this:

Vertical lines, not straight, not touching, covering the wall evenly.

Tutorials for recreating classics of generative art with JavaScript and canvas.

Graham is recreating the (beautiful and addictive) Geometry Wars in canvas.

If you’re on Windows, XBONE or XB360 controllers are the easiest to use. On Mac, a PS4 Dualshock 4 or wired 360 controller (with a downloadable driver) works well.

A fun game with pins and string in canvas.

A social network for snippets of JavaScript effects in canvas, written in 140 characters or fewer. Impressive!

Refresh to get a new randomly generated constellation.

A lovely bit of creative JS from Emily

The texture here is shockingly realistic.

CanvasSwirl: An animated spirograph experiment in JavaScript and canvas by xhva.net

But, like, have you have ever really looked at your hand?

Dave is making a nifty in-browser game that you can play by yourself or in co-operative mode. If your device has a gyroscope, you can use that to aim. Very cool!

(And it looks like it’s all set to become a progressive web app once it’s running on HTTPS.)

I think this might be the most tasteful, least intrusive use of scroll events to enhance a Snowfallesque story. It’s executed superbly.

You can read all about the code. Interestingly, it’s using canvas to render the maps even though the maps themselves are being stored as SVG.

(There’s a caveat saying: “This is a highly experimental project and it might not work in all browsers. Currently there is no IE support.” I don’t think that’s true: the story works just in IE …that browser just doesn’t get the mapping enhancements.)

I remember when I first saw Paddy’s illustration for this year’s dConstruct site, I thought “Well, that’s a design direction, but there’s no way that Graham will be able to implement all of it.” There was a tight deadline for getting the site out, and let’s face it, there was so much going on in the design that we’d just have to prioritise.

At the next front-end pow-wow at Clearleft, Graham showed the dConstruct site in all its glory …in Lynx.

I love that. Even with the focus on the gorgeous illustration and futuristic atmosphere of the design, Graham took the time to think about the absolute basics: marking up the content in a logical structured way. Everything after that—the imagery, the fonts, the skewed style—all of it was built on a solid foundation.

It would’ve been easy to go crazy with the fonts and images, but Graham made sure to optimise everything to within an inch of its life. The biggest bottleneck comes from a third party provider—the map tiles and associated JavaScript …so that’s loaded in after the initial content is loaded. It turns out that the site build was a matter of prioritisation after all.

There’s plenty of CSS trickery going on: transforms, transitions, and opacity. But for the icing on the cake, Graham reached for canvas and programmed space elevator traffic with randomly seeded velocity and size.

Oh, and of course it’s all responsive.

So, putting that all together…

The dConstruct 2015 site is gorgeous, semantic, responsive, and performant. Conventional wisdom dictates that you have to choose, but this little site—built on a really tight schedule—shows otherwise.

Well, thanks to the ass-hattery of AddThis, the use case of your site’s visitors switching off JavaScript for (legitimate) security reasons just became a lot more plausible.

But you’re using JavaScript as an enhancement, right? You’re not relying on it for core tasks, right?

When I announced the original website two months ago, I was very, very excited about the line-up, but I was less excited about the design of the site itself. To be honest, it was a somewhat rushed affair. It did the job but it didn’t have much pizzazz. I had some design direction—colour, typography, texture—courtesty of Mikey, but I didn’t push it to do anything very interesting. 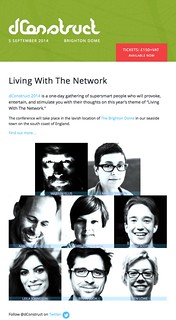 So Mikey took some time to iterate and revise, and he came up with a gorgeous new design. I think this does a much better job of capturing the spirit of dConstruct. 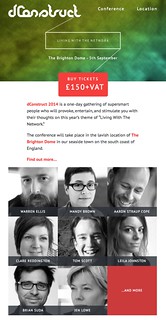 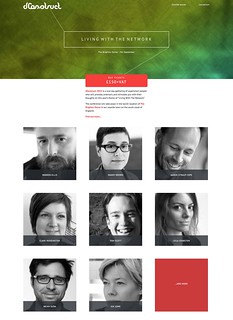 As well as a revised colour palette and lusher textures, there was also opportunity to do something quite playful in the masthead. Making sites for our own projects always presents a nice opportunity to try out some whacky stuff that we might not get a chance to do on client work.

In this case, the plan was to play with the theme of this year’s dConstruct—Living With The Network—and use it as part of the visual design, literally networking up parts of the interface.

It was a nice chance for me to play around with canvas. But I didn’t dive into code straight away. I had a think about how I could add this an enhancement to the responsive layout.

My plan was to generate a canvas element under the existing elements in the header using z-index to keep them separated while maintaining the appearance of having everything connected up. 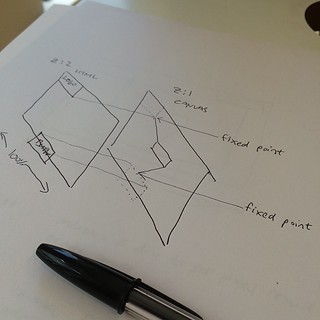 It worked out pretty well. But I wanted to push it further. How about making it an interactive element that responds to the user?

I know, I know. It’s very silly and frankly a bit wanky, but y’know, it felt like it would be nice and playful.

I had no idea how to do it though. At an internal code review here at Clearleft, I demoed what I had so far and asked for advice. The general consensus was that I should probably be using SVG rather than canvas for making interactive graphical elements. They’re probably right, but I distinctly remember learning about hit detection and mouse events in canvas during Seb’s excellent Creative JS workshop.

So I stuck with canvas and fiddled around with numbers until I got to something that felt lke it reacted nicely to hover events (or touch/clicks if hover isn’t available …or even if it is). requestAnimationFrame was a godsend when it came to getting smooth animations.

Have a play with it. It’s hard to miss. It’s not exactly a subtle easter egg.

The content of the site remains much the same. While I was disatisfied with the original visual design of the site, I’m still pretty chuffed with the copy.

One small change I made was to give the code of conduct its own page (and expand on it a bit). Previously it was included with terms and conditions but there was a good chance that it could’ve been overlooked there.

Anyway, I hope you like the new site. I think Mikey did a terrific job with the design and it was a lot of fun to put together …especially the silly wanky bit. The only slight disadvantage is that the page weight comes in slightly larger than the previous design. But I’ll keep optimising to see if I can shave off some bytes here and there. 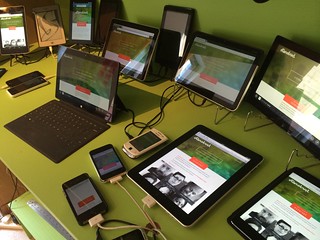 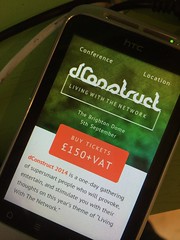 Oh, and you might notice one significant change on the home page. In addition to the speakers that are currently listed, there’s an addendum that reads “…and more”. That’s because the line-up for this year’s dConstruct, awesome as it is, is not yet complete. It’s going to get even better.

If you don’t have your ticket to this year’s dConstruct yet, what are you waiting for?

See you on September 5th.

A lovely little from Josh that allows you to draw shapes in a canvas element and then copy the resulting code.