When I was speaking at conferences last year about service workers, I’d introduce the Cache API. I wanted some way of explaining the difference between caching and other kinds of storage.

The way I explained was that, while you might store stuff for a long time, you’d only cache stuff that you knew you were going to need again. So according to that definition, when you make a backup of your hard drive, that’s not caching …becuase you hope you’ll never need to use the backup.

But that explanation never sat well with me. Then more recently, I was chatting with Amber about caching. Once again, we trying to define the difference between, say, the Cache API and things like LocalStorage and IndexedDB. At some point, we realised the fundamental difference: caches are for copies.

Think about it. If you store something in LocalStorage or IndexedDB, that’s the canonical home for that data. But anything you put into a cache must be a copy of something that exists elsewhere. That’s true of the Cache API, the browser cache, and caches on the server. An item in one of those caches is never the original—it’s always a copy of something that has a canonical home elsewhere.

By that definition, backing up your hard drive definitely is caching.

Anyway, I was glad to finally have a working definition to differentiate between caching and storing.

Collusion between three separate services owned by the same company: the Google search engine, the YouTube website, and the Chrome web browser.

Gosh, this kind of information could be really damaging if there were, say, antitrust proceedings initiated.

In the meantime, use Firefox

I added a long-overdue enhancement to The Session recently. Here’s the scenario…

You’re on a web page with a comment form. You type your well-considered thoughts into a textarea field. But then something happens. Maybe you accidentally navigate away from the page or maybe your network connection goes down right when you try to submit the form.

This is a textbook case for storing data locally on the user’s device …at least until it has safely been transmitted to the server. So that’s what I set about doing.

My first decision was choosing how to store the data locally. There are multiple APIs available: sessionStorage, IndexedDB, localStorage. It was clear that sessionStorage wasn’t right for this particular use case: I needed the data to be saved across browser sessions. So it was down to IndexedDB or localStorage. IndexedDB is the more versatile and powerful—because it’s asynchronous—but localStorage is nice and straightforward so I decided on that. I’m not sure if that was the right decision though.

Alright, so I’m going to store the contents of a form in localStorage. It accepts key/value pairs. I’ll make the key the current URL. The value will be the contents of that textarea. I can store other form fields too. Even though localStorage technically only stores one value, that value can be a JSON object so in reality you can store multiple values with one key (just remember to parse the JSON when you retrieve it).

I could play it safe and store the comment whenever the user presses a key within the textarea. But that seems like overkill. It would be more efficient to only save when the user leaves the current page for any reason.

Alright then, I’ll use the unload event. No! Bad Jeremy! If I use that then the browser can’t reliably add the current page to the cache it uses for faster back-forwards navigations. The page life cycle is complicated.

So beforeunload then? Well, maybe. But modern browsers also support a pagehide event that looks like a better option.

In either case, just adding a listener for the event could screw up the caching of the page for back-forwards navigations. I should only listen for the event if I know that I need to store the contents of the textarea. And in order to know if the user has interacted with the textarea, I’m back to listening for key presses again.

But wait a minute! I don’t have to listen for every key press. If the user has typed anything, that’s enough for me. I only need to listen for the first key press in the textarea.

Handily, addEventListener accepts an object of options. One of those options is called “once”. If I set that to true, then the event listener is only fired once.

I’ve abstracted my code into a gist. Here’s what it does:

That last step isn’t something I’m doing on The Session. Instead I’m relying on getting something back from the server to indicate that the form was successfully submitted. If you can do something like that, I’d recommend that instead of listening to the form submission event. After all, something could still go wrong between the form being submitted and the data being received by the server.

Still, this bit of code is better than nothing. Remember, it’s intended as an enhancement. You should be able to drop it into any project and improve the user experience a little bit. Ideally, no one will ever notice it’s there—it’s the kind of enhancement that only kicks in when something goes wrong. A little smidgen of resilient web design. A defensive enhancement.

This is brilliant technique by Remy!

If you’ve got a custom offline page that lists previously-visited pages (like I do on my site), you don’t have to choose between localStorage or IndexedDB—you can read the metadata straight from the HTML of the cached pages instead!

This seems forehead-smackingly obvious in hindsight. I’m totally stealing this.

A clever use of localStorage to stop data from being lost when your visitors are offline.

Here’s the flow that eBay use for the font-loading. They’ve decided that on the very first page view, seeing a system font is an acceptable trade-off. I think that makes sense for their situation.

Interestingly, they set a flag for subsequent visits using localStorage rather than a cookie. I wonder why that is? For me, the ability to read cookies on the server as well as the client make them quite handy for situations like this.

I’ve just come back from a ten-day trip to Germany. The trip kicked off with Indie Web Camp Düsseldorf over the course of a weekend. 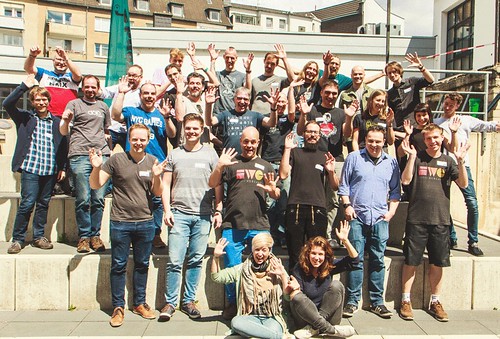 Once again the wonderful people at Sipgate hosted us in their beautiful building, and once again myself and Aaron helped facilitate the two days. 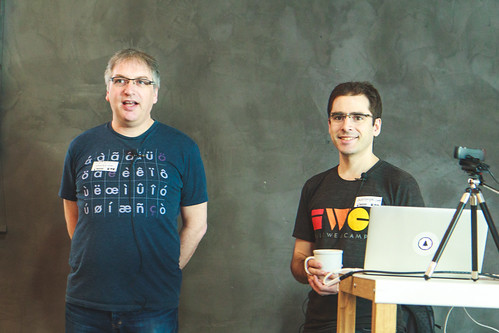 Saturday was the BarCamp-like discussion day. Plenty of interesting topics were covered. I led a session on service workers, and that’s also what I decided to work on for the second day—that’s when the talking is done and we get down to making. 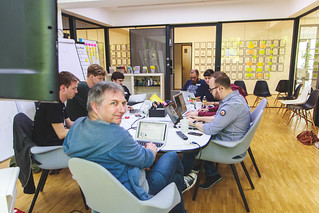 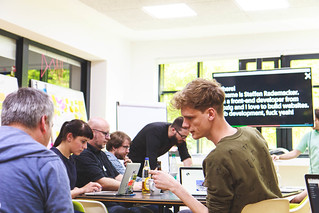 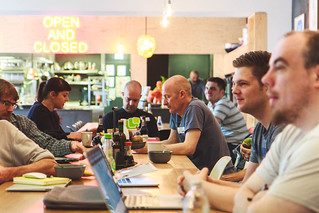 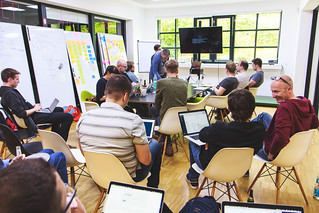 I like what Ethan is doing on his offline page. He shows a list of pages that have been cached, but instead of just listing URLs, he shows a title and description for each page.

I’ve already got a separate cache for pages that gets added to as the user browses around my site. I needed to figure out a way to store the metadata for those pages so that I could then display it on the offline page. I came up with a workable solution, and interestingly, it involved no changes to the service worker script at all.

When you visit any blog post, I put metadata about the page into localStorage (after first checking that there’s an active service worker):

In my case, I’m outputting the metadata from the server, but you could just as easily grab some from the DOM like this:

Meanwhile in my service worker, when you visit that same page, it gets added to a cache called “pages”. Both localStorage and the cache API are using URLs as keys. I take advantage of that on my offline page.

The nice thing about writing JavaScript on my offline page is that I know the page will only be seen by modern browsers that support service workers, so I can use all sorts of fancy from ES6, or whatever we’re calling it now.

I start by looping through the keys of the “pages” cache (that’s right—the cache API isn’t just for service workers; you can access it from any script). Then I check to see if there is a corresponding localStorage key with the same string (a URL). If there is, I pull the metadata out of local storage and add it to an array called browsingHistory:

Then I sort the list of pages in reverse chronological order:

Now I loop through each page in the browsing history list and construct a link to each URL, complete with title and description:

Finally I dump the constructed markup into a waiting div in the page with an ID of “history”:

All those steps need to be wrapped inside the then clause attached to caches.open("pages") because the cache API is asynchronous.

There you have it. Now if you’re browsing adactio.com and your network connection drops (or my server goes offline), you can choose from a list of pages you’ve previously visited.

The current situation isn’t ideal though. I’ve got a clean-up operation in my service worker to limit the number of items stored in my “pages” cache. The cache never gets bigger than 35 items. But there’s no corresponding clean-up of metadata stored in localStorage. So there could be a lot more bits of metadata in local storage than there are pages in the cache. It’s not harmful, but it’s a bit wasteful.

Maybe I’ll do that at the next Homebrew Website Club here in Brighton.

A quick drag’n’drop way to base 64 encode your web fonts so you can stick ‘em in local storage.

A really handy bit of code from Aaron for building a robust file uploader. A way to make your web-based photo sharing more Instagrammy-clever.

LocalStorage in use on the Fontdeck Website | Fontdeck Blog